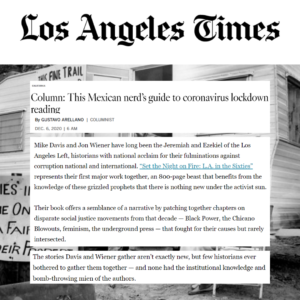 Set the Night on Fire: L.A. in the Sixties was included in a reading recommendation in the Los Angeles Times by Gustavo Arellano.

“One of the few good things Southern California saw in 2020 was a bounty of history books on the region. The ones I’m going to recommend all hit issues — protests, politics, representation and the Dodgers — that are ever-present ’round here but which shared the spotlight with the coronavirus.

Mike Davis and Jon Wiener have long been the Jeremiah and Ezekiel of the Los Angeles Left, historians with national acclaim for their fulminations against corruption national and international. “Set the Night on Fire: L.A. in the Sixties” represents their first major work together, an 800-page beast that benefits from the knowledge of these grizzled prophets that there is nothing new under the activist sun.

Their book offers a semblance of a narrative by patching together chapters on disparate social justice movements from that decade — Black Power, the Chicano Blowouts, feminism, the underground press — that fought for their causes but rarely intersected.

It works best when Davis and Wiener remind readers of the unlikely roots of local institutions now long past their glory days: KPFK-FM 90.7 before it became an endless fund drive loop, the Archdiocese of Los Angeles when it was a far-right outfit instead of today’s open-borders champion.

The stories Davis and Wiener gather aren’t exactly new, but few historians ever bothered to gather them together — and none had the institutional knowledge and bomb-throwing mien of the authors.”