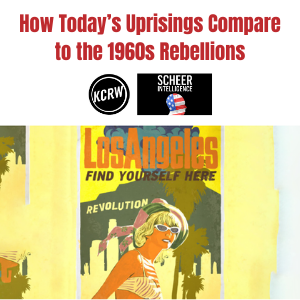 Jon Wiener discussed Set the Night on Fire: L.A. in the Sixties with Robert Scheer on the Scheer Intelligence podcast on September 17, 2020.

“The core of this book is a chronological narrative of Black and Latino [people] organizing in struggle. It’s a movement history that starts in 1960, when young Black people in L.A. were inspired, like you and I were, by the Civil Rights Movement in the South, by the sit-in movement and the Freedom Riders. That’s the spine of the book. And then around that, we discuss all the other movements of the era: the antiwar movement, the women’s liberation movement, the gay liberation movement; the Asian American movement appears at the very end.” —Jon Wiener

You can listen to the conversation here.